In an article titled “The Philosopher King and the Creation of NPR,” writer Steve Oney excerpted his own book beiing written for publication by Simon and Shuster. In it, Oney tells the story of NPR’s first day in May, 1971 when the nation’s capital was under seige from anti-war demonstrators. He tells a funny (in retrospect!) story about how I was sprayed with tear gas. “Protesters urged (me) to urinate into a handkerchief then hold it over (my) nose. The ammonia, they said, would neutralize the poison. Russell replied, ‘I’d rather die.’”

Writer Oney also quotes me as saying about Bill Siemering, NPR’s first Program Director and the inventor of NPR’s first program All Things Considered. “Siemering had this vision of radio as an instrument of education 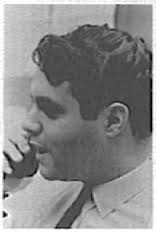 in the finest sense … He saw radio as a totally different animal.”

Finally, Oney quotes me describing the unusual staff assembled for the early NPR: “It was an odd assortment of folks,” said Russell, who at least had wire service experience. “He hired me as a safety in case these crazies went off the deep end.”

You can read the entire article here.