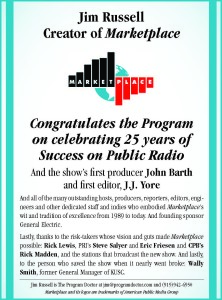 June 9th’s edition of Current Newspaper carries this ad, written and placed by me in honor of Marketplace’s 25th anniversary year. (Click on the image, to read it.)

Who knew that the program would survive a quarter of a century?! Indeed, those of us who were there at the beginning often doubted whether it would survive a quarter of a year! I will always remember Marketplace’s first Palo Verde site in Long Beach, next to the Merry Maids. As we prepared to launch an ambitious new show in just three months, I observed that the balcony was only one story high – so jumping off would mean only injury, not death!

I want to thank all of those named for their commitment and faith. Together they are responsible for creating an enormous success, one of the triad of top programs in public radio. No matter the aggravation it and we caused each other from time to time, let us never forget our enormous pride in the child we bore. Thank you from the bottom of my heart,