“Jim has been at the beginning of many of the national programs that give identity to public radio.

“Jim’s editorial and production leadership helped define NPR’s sound and value to the audience. In his various positions, Jim served as mentor to many of the poeople who are well-known at NPR or in other sectors of the broadcast industry.”

“Congratulations. I predict you’re going to be busier than you’ve ever been. Not to mention happier. I’ll start sending you every producer who calls and has a great idea for the next ‘Car Talk’ of lawncare.”

broadcasting – it was a personal and professional joy to work with Jim and his team. Many of today’s most innovative sponsorship techniques were developed and encouraged by Jim and the APR team. Truly groundbreaking!”

Jim Harman, Consultant and former head of Advertising for GE and Tyco

“I’ve worked with Jim Russell in both of his incarnations, TV and Radio–places where the word ‘creativity’ is thrown around but seldom realized. Jim is one of the true, very few originals in both worlds. He manages to be ‘out there’ and realistic at the same time. A rare bird.”

“You have been so key to our development … Your detailed critiques, your thoughtful questions about breaking away from empty legacy approaches, your challenges about being ruthless in our scrutiny of our effectiveness have given me a deep appreciation for the reasons why the work you’ve signed your name to has made history.”

“Given your independent spirit, Jim, this seems like a natural for you. And given your extensive programming experience, you know well the process and pitfalls of bringing an idea to fruition.”

“Jim Russell is in that small circle of people who make a mark in an industry. With Marketplace, he created a signature show that for years has been one of the centerpieces of public radio.”

“His range, intellect and creative approach initiated a self actualization process in the conceptual phase, whereby we became aware of exactly what it was we, ourselves, do best … we’ve created the best program we’ve ever made.”

“Congratulations Jim! The world needs what you have to offer — may the wind lift your wings!”

“Russell was (and is) the sort of ‘inspirational spark’ that would regularly electrify my day, week or year. He has terrific ideas and the confidence to express them … even when they violate the ‘norms’ of our traditional business. He also has a terrific sense of humor. I wish I could work with him every day.”

And, just in case you are inclined to take Jim too seriously, please keep this photo in mind. 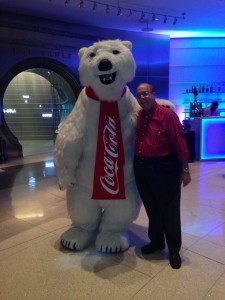 BTW, that’s Jim on the right — at The World of Coca Cola in Atlanta, Ga.