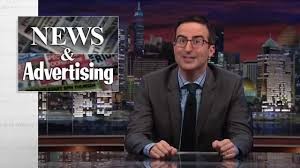 Newspapers and legacy media are now climbing aboard a digital invention called “Native Advertising” that minimizes the difference between news and commercials. Time Inc., The Atlantic, The New York Times and many other newspapers are lowering the bar between editorial content and commercials … actually disguising the commercials by making them appear to be part of the news or other editorial content. We’ve all noticed “product placement” in movies, where branded commodities show up. But up until fairly recently, the news was considered sacrosanct. But, no more.

A beautiful explanation of what Native Advertising is comes from John Oliver in a show he did last August. Check it out here. And keep your eyes keenly focused on the news you watch or click on … as it turns into something truly misleading called “branded content.”