Jim is the person responsible for bringing Carl to NPR in the first place. Jim had worked with Carl at Washington, DC commercial radio stations WPIK and WAVA. In 1975, Jim “recruited” Carl to join him at National Public Radio. As Jim recalls in Carl’s book,

“Carl was not initially embraced by all of the mostly young staff at NPR. Many of them, in their mid-twenties, thought Carl, in his thirties, was too old and too ingrained in the old ways of broadcasting … I remember telling the twentysomethings that Carl would become the Rock of Gibraltar of NPR News, that others would come and go, but Carl would stay and become THE signature sound and style.”

Carl pays me a nice compliment, saying, “Jim Russell knew good radio. Brilliant fellow. I have a lot of regard and respect for Jim.” 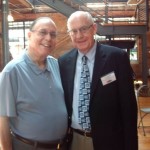 Among those who praise Carl in his book are Bob Edwards, Cokie Roberts, Nina Totenberg, Paula Poundstone, Adam Felber, Susan Stamberg and many others.

You can buy Carl’s book on Amazon! Happy reading.